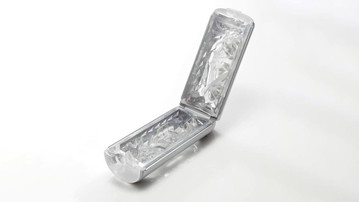 So get ready to undo your pants and say hello to your own little friend. These are my picks for the best male masturbatory aids.

Note: male masturbatory aids are priced as they were at printing. Pricing, and availability, are subject to change.

No matter how you feel about sex dolls, there's no denying this sex doll is hot. A feverish hot, at up to 104 degrees F! She's smart too. Smart enough to tell you how good you heat her up, to moan in response to your touch of her nostrils, and to talk dirty when you lick her big toe.

Or, like, whichever other lady parts on her you program to audibly turn her on as they physically get the horndog juices flowing in you.

In other words, this hot and heatable sex doll also has WiFi, Bluetooth, and phone app connectivity that give you, her lover, the ability to set custom audio to accompany specified actions and stimulations on various parts of her body. That means moans, groans, screams, and cries of Oh yes, Big Daddy! during the deed, and then a warm body to hold you when you're done.

From the Tesla of masturbatory aids that is the smart sex doll, we go to the Toyota Yaris of them with Paco's Taco Stroker.

Not to slight Paco. In fact, maker Screaming O manages to combine many dudes' two great loves - soft tacos and jacking off - in this superb open-faced stroker they claim will satisfy every single time.

The JerkShirt is a forthcoming (say, 3 to 5 minutes?) classy blue button-up with a prosthetic arm you can move and position anywhere so you can maintain equal classiness as you jerk off in public. The 3:00 crash at work. The stressful brunch at the country club to meet your girlfriend's parents. The excruciating 12-hour flight to Europe. Combat fatigue, nerves, and boredom with your most favorite alone-time pastime on earth without getting fired, exiled, or arrested!

In addition to the decoy arm, the JerkShirt is also sized to accommodate your real hand and hide your crotchal region as you choke the chicken so you'll be as comfortable as you are covert in your self gratification. The shirt's interior also has a built-in splash guard to keep the deed mess-free and avert tricky questions about when you spilled Aunt Jan's pineapple Jell-O salad all over your lap.

The Quickshot is also Fleshlight's most compact sleeve to date, and with its circular, wave-like texture and transparent construction, it "lends itself to a visibly commanding experience" for everyone involved.

The Japanese-made A10 Piston has risen out of what its creators call a passion to become the pioneers of electric masturbators. While (surprisingly, yet on second thought not surprisingly at all) other piston masturbators do exist, this one's up-and-down thrusting piston structure features a choice of several movement patterns that realistically simulate the natural sensations and strong stimulations of actual and variable sexual contact. Basically, this robotic vagina's got everything but the human girl flailing around it!

Since the self-driving car and going public things haven't worked out so well for Uber, they've decided to diversify with a foray into the personal lubricant business. Uberlube, a luxury lubricant for discerning "ridesharers," endeavors to do more for the sexually active who select it: "Instead of just being slippery, Uberlube is designed to transfer sensation while reducing friction."

OK, fine, I'm making it up. Well, not the existence of Uberlube luxury lubricant, or that quote, which the company legit uses as its pitch. But "the company" isn't the Uber on wheels we all know and love (or hate) but a completely separate business, itself called Uberlube, that focuses solely on supreme satisfaction through snake-stroking slickness.

Virtual Mate is preparing to release some very slick - like, Astroglide slick - new technology. Self-described as "the world's first virtual intimacy system," Virtual Mate is a hyper-realistic VR sex game for your PC, laptop, mobile device, or VR Headset primed to beguile and get off everyone from gamers to, well, dudes with a pulse.

The Cob Quicky lends a hand in buttering your corn on the cob, getting the job done mess-free and in record time. It's a hand for a job. A Hand. Job...

It doesn't have to be a holiday or special occasion to surprise your lady with a thoughtful gift. The Svakom Gaga Sex Selfie Stick even has a foolproof, built-in mechanism for gauging how much she likes it. Come on, sugar...

Get your 55-gallon barrels of lube out, dudes, because Virtual Mate is about to unleash some very slick new technology. Forget gifts for your girlfriend, this hyper-realistic VR sex game for your PC, laptop, mobile device...

Ladies and their lady parts must really like this Womanizer contraption and its suction cuppy O-face of a tip because this is one sex toy I keep: 1) reading about in major publications; 2) hearing all my girlfriend's...

Usually when I come across things like the Tenga Flip Hole on Amazon, a random oblong instrument or box with a button, and a title that gives no indication of what the F it is, I just assume it has something to do with...