Dude's Must See Products for April 2021 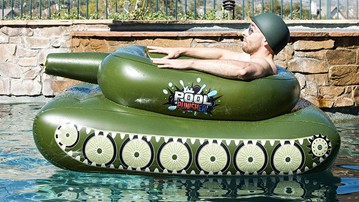 Tiny, mighty, lasts all night, and whether upside down or underwater, is always ready to go. And that's just the tip - the silver tip - of the ForeverPen, a new super tiny inkless pen from World's Tiniest.

Measuring in at just 0.99" long, the ForeverPen is out to prove smaller is better, or at least endlessly more convenient when you want to add a writing instrument to your EDC.

These tiny 3-inch air horns put big sound in the palm of your hand. And also the breath of your lungs. Operating off of human rather than compressed air, the 3-inch barrels require you to channel your inner boogie-woogie bugle boys and girls to create a "blaring and lucid sound" that will grab people's attention during an emergency, a boat trip, a sporting event, or an awesome audio prank.

What do you get when you put a chicken on a motorcycle? A badass mother clucker ready to ride the flames! Of the grill. While hoisted up on a beer can. And dead and de-feathered, of course.

Etsy shop Tom's RiDICKulous Things is responsible for this line of Motorcycle Beer Can Chicken Stands, and indeed the stainless steel grilling companions merit their inclusion in a shop with that name. Motorcycle enthusiasts, grill masters, chicken lovers, and anyone who digs playing with their food are going to get a kick - and a cluck - out of these American Rider, Canadian Rider, and Flaming Rider chicken stands.

The DudeIWantThat.com Vaccingles Night party pack contains everything you need to plan the perfect mixer for singles who have been vaccinated. In other words, all your beyond-horny friends, plus randos off the street who also look equal parts cool and sexually frustrated. I know, you'll try to blow this off as a joke, or say you and your libido have fared just fine over the last year. But there's no need to lie. And definitely no need to restrict the blowing off to a perceived joke when it could be so much better applied to your steam and genitalia.

I mean, who says your first party out of isolation shouldn't be one of desperation? Come on, it's time to get your come on.

Omni claims to have created the world's first real, legit, get-off-the-ground (way off the ground, McFly!) hoverboard. This is well beyond Back to the Future's famed levitator skating a few inches off the ground, Omni's Hoverboard operates more like a personal flying machine. Or like a pet baby dragon that will take you for rides in the sky.

If you're on the hunt to brighten someone's day, these 15 little gifts should present you with plenty of opportunities. Whether it's a spouse stressed from work, a buddy down on dating, a mama about to have a Mother's Day, or your own self feeling like a 2/10 lately, my collection of fun, funny, and funky gifts to brighten someone's day are ready to light up the face of just about any someone you've got.

The Pool Punisher reminds us there are pool floats that mean pool floatin', and pool floats that mean pool business. And this inflatable tank with a built-in water cannon means pool business. The giant pool toy does a decent job of shaping and decorating itself like a military tank ready for battle, and an even better job of taking that battle to water with its "armor": a deep inset seat for a single rider; and a pump action squirt gun able to blast liquid ammo up to 50'.

What's worse: having egg or your face; or having T-Rex's jaw on your face? Well, now you can have both with Fred's Egg-a-Matic T-Rex skull hard-boiled egg mold!

The kitchen tool sculpts your hard-boiled eggs - post-hard-boiling - into a 3D T-Rex skull replica, creating the kind of dino egg that isn't just edible and delicious, but also a fun philosophical musing! You see the egg doesn't contain a baby T-Rex, but is itself an old, dead T-Rex....

The myth, the legend, the Firebird. Nixie tube timepieces have carved out their niche amongst steampunk fans, tech geeks, and many a bachelor pad, but Nixie Watch Store's Firebird Nixie Tube Watch could look right at home on the wrist of just about any dude with an appreciation for unique design and style.

Despite its showcase of Cold-War-era cathodes, the Firebird Watch comes off as sleek and modern thanks to Nixie Watch Store's chunky geometric case and tire tread rubber band. The case is made of milled and then anodized hard aluminum alloy, with sapphire crystal glass laid over the top to protect the nixie tubes.

What to Eat Food Dice

Hey, it's a food die for a foodie! OK, maybe more like indecisive takeout junkies. What To Eat Food Dice are oversized wooden cubes whose 6 sides each contain the image and name of a different type of cuisine carved into them. Food Dice come either as standard or custom options. The former contains takeout fare such as hamburgers, pizza, tacos, and chicken. For the latter, Etsy shop NOBAist will engrave your die with any 6 food types and images you choose.

It's not that words haven't always been weapons, but this Pineapple Grenade Keyboard depicts how much easier, and deadlier, it is to use them as such today. The 25-key handheld typing companion is a fine manifestation of what happens when we fire off thoughtless comments and sentiments, unproven statements and research, and information whose only certainty is that it's going to get clicks and rile people up: a QWERTY explosion.

Am I the only one who's never heard of a New England hot dog bun, and therefore a New England Hot Dog Bun Pan? WTF is this? It looks like vertically challenged bread, or angel food cake someone flipped over too early after it came out of the oven. I know New Englanders like to deviate from well-established standards (Fluffernutter sandwich, anyone?) but an inside-out hot dog bun - or I guess it's more like an inside-out-and-inside bun? That's bananas! No. That's banana hot dogs!

When I say I would buy these 20 items I bought on Amazon 100 times again, I don't mean I would order 100 more of them right now. Even as a hoarder with Amazon Prime shipping, I don't need 101 of any of the products in...

Dude's Must See Products for March 2022

Dude's must see products for March 2022 get jiggy with it. And by that I mean they satisfy normal urges in a strange, jiggy if you will, kind of way. Craving chocolate? Try ChoClits. Jonesing for sexy time? How about...

Dude's Must See Products for April 2022

April is, of course, home to the great April holidays of Easter, April Fool's Day, and 4/20. But with the exception of that last one, for which I crafted a special Smokin' Hot Gifts for Weed Enthusiasts round-up, none...

Dude's Must See Products for February 2022

Dude's Must See Products for December 2021

Another month of Dude's must see products, and, with December, another whole year of Dude's monthly must see product roundups gone. In December 2021, I finished off my riveting holiday gift guides with luxury gifts, sustainable...

Dude's Must See Products for September 2021

Dude's must see products for September 2021 have love on the brain. Love of Fall, that is. And in this case, Fall is about 75% Halloween, and 25% cozying up, cleaning up, and / or decking out your home, garage, and any...

Dude's Must See Products for October 2021