Bird Box Challenge: Tools to Hone Your Other 4 Senses 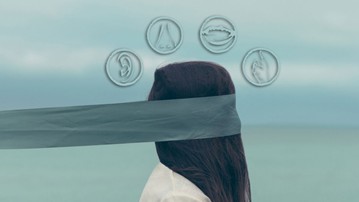 Yeah, yeah, I know. The real Bird Box Challenge is exclusive to the sense of sight, people walking around with a blindfold on while someone records them knocking over furniture and falling down stairs for Twitter and Instagram. But rather than turning the Netflix film's exploration of monster-induced voluntary blindness into something unsafe and kind of stupid, rather than simply depriving yourself of your eyesight, why not consider a different kind of Bird Box Challenge - one that dares you to hone your other 4 senses?

If you tend to neglect the sounds, flavors, odors, and feels in your world - and a good chunk of us do - here are some tools I've found to help you become better at hearing, tasting, smelling, and touching. Many find enhancing these senses, rather than leaning on the ol' eyesight crutch all the time, returns far better life experiences, especially when it comes to food and drink, health and wellness, and travel.

And, yes, if you really want to, you can test out all of these tools to hone your other 4 senses in a blindfold. While your friend Cornelius records you for Twitter and Instagram.

The first step towards super hearing: digging up and dumping out all the crap that's built up in your ears. Elephant Ear, which looks like a bottle of Windex with a hose for a spout...oh wait, it's a trunk! Ha! I figured it was called Elephant Ear just because it's for people with elephantine quantities of wax clogging their canals, but this makes the name doubly awesome!

So the Elephant Ear bottle system has a trunk that inserts into the opening of a waxy ear and then guides the flow of a peroxide and warm water solution into it. Users should tilt the ear getting ear-igated towards their shoulder and hold, or have their friend Cornelius hold, some sort of catch basin underneath the earlobe to catch the water that will trickle out. As the bottle empties, it will draw up wax deposits and drive them out of the ear as well.

I suppose "hearing amplifier" is a euphemism for "hearing aid," two words that, in my experience, cause the people who need them to become belligerent and grumbly about how they f'ing hear just f'ing fine.

But for those of you who seek metaphysical enlightenment, or just pure, physical domination of your 5 senses, a hearing amplifier could provide a focal point for your ear training, forcing you to pay more attention to sounds by, well, making all of them louder.

Rather than inviting the world into your ears like the Hearing Amplifier, Bose's Quiet Comfort 35 noise-cancelling headphones block it out. So you can listen with perfect clarity and surround sound to all the nuances of your favorite songs and shows or, if you prefer, to nothing at all.

They say the flavors we taste are 80% a result of what we smell, making these 2 senses almost inextricably bound when it comes to honing and enhancement. And while not all of us can be supertasters, we all can improve our sense of smell through consciousness and training.

Consciousness involves actions such as taking note of smells when they hit your nose, and naming them out loud, or at least in your head. The name can either be one that's obviously what the smell is (e.g., poo) or one that's meaningful only to you, but that will help solidify the smell in your memory (e.g., Grandma's living room.)

Training your nose involves a little more structure and consistent repetition, such as that the Master Wine Aroma Tasting Kit provides. The box's 88 vials of varying aromas are wine-specific, and intended to help budding wine snobs sync their schnoz holes up with their pie holes. But I think anyone interested in olfactory betterment can use these scents, which range from from gooseberry to caramel, and flint to horse sweat, to achieve their goal.

What's That Smell? comes with a stack of mystery scent cards folded over to hide their name, and a scratch 'n' sniff-style wand that releases the smell. Players take turns guessing their scents, with the game's winner getting to choose a loser to "suffer the whiff of shame." That is, select another player to take 3 big inhales of one of the STANK cards, which include Extra Old Toe Cheese and Diaper Blowout.

Sure, you could buy a blind wine tasting kit like this one and just cover up the bottles you're trying to smell and taste your way through. But at one of the maybe 3 fine dining experiences I've had in my life, a sommelier gave my wife and me a slightly different blind tasting test. He poured our first one in a matte black wine glass. It was like drinking blindfolded. We couldn't even see if the wine was red or white or sparkling or still before tasting it. And it wasn't that much easier to tell after.

Once you've mastered your sense of smell - or before you start if you want to know how much work you have to do - grab a set of black glasses and test yourself. If you don't care about or like wine, go for the highball or double old fashioned glasses and use beer. Or spirits. Or even different kinds of sodie or La Croix instead.

A fine gift for a beer lover, and the ultimate gift for a beer snob, Unlabeled tests players' knowledge of what they're drinking with turns trying to identify unmarked pours' characteristics, general beer category, or exact beer type. The Unlabeled board is divided into sections of increasing specificity, with an increasing number of points awarded for scent-and-taste-sleuthing whether the beer is a stout or an ale, and then what type of ale (e.g., IPA) and then what type of IPA, etc.

Like the don't-get-killed-by-a-mysterious-force game of Bird Box, the Miracle Berry Fruit Tablet game of mberry is best played with a blindfold.

Miracle berries, which are real, actual fruit berries, have a a glycoprotein called Miraculin, which modifies taste perception. Most notably, it makes sour and bitter foods, such as lemons and apple cider vinegar, taste sweet.

Granted, the tablets are more of a cool party trick than a way to truly hone your sense of taste, but if you try your selected foods both before and after a Miracle Berry, you'll be in for a sensory experience that could stimulate not just your taste buds, but your interest in food science and flavor profiles.

2C3D is a concept tactile camera created for the blind community, though its use could benefit any seeking to hone their sense of touch.

Industrial designer Oren Geva built the 2C3D, sort of ingeniously, as a cross between a point-and-shoot camera and a pin art toy. When the lens captures an image, it presses the image's general shape into the camera's 3D pixels to make a "touch screen" for the person holding it.

The 2C3D can form tactile interpretations of both still photos and video, and users can feel what the camera is seeing in real time, or click to record the image / video and call up the 3D file again later.

The Bradley Tactile Watch is another clever - and realized, not concept - invention for the sight-impaired that can also benefit the sight-dependent. Its watch face is designed with raised hash marks encircling the body, and a pair of ball bearings that rotate to designate hours and minutes. Bradley allows one and all - whether they have permanent loss of vision, want to check the time in a dark room or theater without blaring a watch or cell phone backlight, or are in painfully boring company and don't want the poor saps to see them counting down the minutes to a planned escape - to determine how many of today's 24 hours have gone by using no more than a finger.

What Doesn't Kill Us

Thermoception refers to our ability to sense heat and cold on our skin, inside and out. It's not exactly sense of touch, but I consider it in the same family, and Scott Carney's What Doesn't Kill Us: How Freezing Water, Extreme Altitude and Environmental Conditioning Will Renew Our Lost Evolutionary Strength makes it a very interesting topic to explore. And, for the brave, a useful set of sense skills to work on.

What Doesn't Kill Us shares Carney's study of cold adaptation and journey to make it a part of his own life. He uses Dutch fitness guru (and literal X-Man) Wim Hof as a foundation for his research, and ultimately his personal quest to spend 28 hours climbing to the frigid and snowy summit of Mt. Kilimanjaro wearing not much more than his birthday suit.

Carney, backed by some scientific studies on Hof and his ability to control his body temperature in extreme cold, explains that sucking it up and learning to survive the elements could give much greater returns than just hard bodies and braggin' rights. Cold adaptation may also "help combat autoimmune diseases and chronic pains and, in some cases, even reverse diabetes. "

The Kinetic Sand Kalm Zen Box is a more tactile take on the Japanese Zen Garden intended for adults who find it easier to relax, destress, think creatively, or not die of boredom when they are partaking in some sensory...

Brain-tricking and NKOTB-approved, The Right Cup is a scented and slightly flavored water cup designed to engage your senses in a way that will make you think you're drinking sweet and fruity water when all that's inside...

The Powermask by Silentmode brings on a blackout. Calibrates noise isolation. Activates sensory deprivation. And encourages you to enhance your mind just like you would your body - through regular workouts...

Whoa, flashback, flash forward, and sensory overload. These Spiky Slap Bracelet sensory toys are kind of a trip, fusing the neon slap bracelet with the studded punk dog collar aesthetic from the 1980s to support today's...

Welp, Junior's teething gums and fidgety tendencies will be assuaged by some Shark's Tooth Silicone Chewelry, but I'm not sure how his neck and lungs are gonna feel after he strangles himself with the necklace's cord...

The VisionCheck 2 is the latest in EyeQue's line of equipment for self-administered, smartphone-conducted refractive error tests. In other words, it's a vision check done entirely by me, myself, my phone, and eye...

According to EyeJust, who says it's according to facts, we Americans spend around 11 hours a day staring at screens. And those screens emit a blue light that sears into our retinas, causing eye strain and vision damage...

Too proud to wear reading glasses? Or no, no, I know. It's not that you need readers, it's just that they made the print in this damn magazine / book / newspaper / crossword puzzle too small. No normal-sighted person...

Hey Dad, I got you a smartphone screen magnifier! Happy Father's Day, ya blind ol' bat!...