13 of the Best T-Rex Products 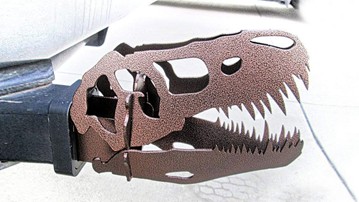 It all started with T-Rex Hates Pushups. Or was it T-Rex Hates High-Fives? Or maybe it goes all the way back to Jurassic Park. However it began, T-Rex has stormed onto the pop culture and related product scene like, well, a ravenous carnivorous dinosaur on a rampage.

And he's left a slew of T-Rex-themed products in his wake. Here are 13 of the best.

Note: products are priced as they were at printing. Pricing, and availability, are subject to change.

Honey, I shrunk the T-Rex! The perfect "pet" for your home or office, this 1" T-Rex roams around and wreaks havoc inside a terrarium - a proportionately tiny terrarium, at 2" x 2" x 2.5". It's physically small enough to take anywhere, but figuratively big enough to make a lasting impression on all who see it.

Especially if you need a gift for a kid who keeps begging for some kind of exotic reptile - iguanas and bearded dragons got nothing on T-Rex.

The expression of pure joy on the What Now Bitch? T-Rex's face probably brings me more joy than the mug's sentiment itself.

But a T-Rex roaring, "What now bitch?" while holding a set of grabbers like the ones I gave my Nana when she got too old to reach high or bend low still brings me a good amount of joy on its own.

Pushups and high-fives all around!

Caution: both ends bite. Metal Worn's T-Rex Folding Knife don't need no stinkin' proportionately-sized arms to do pushups or give high-fives. He don't need no stinkin' arms at all! With a 3.25" 440C stainless steel "tail" heat treated to 60~62HRC, this custom beast of a design is doing just fine without all your stupid extra appendages getting in the way.

When the hitched up campers, boats, and stripper poles are put away, it's T-Rex's turn to play. The T-Rex Trailer Hitch Cover fits into any standard 2 x 2 hitch receiver to add some Cretaceous personality to your truck or SUV.

You have some T-Rex decisions to make: do you want the costume with a built-in sound box in the gloves, or do you want to make your own Tyrannosaurus sounds? This fan-and-battery-operated suit comes in both versions, as well as Teen and Plus sizes.

No one will steal your lunch - or your maker tools, or your stash - ever again with T-Rex guarding it. The Dino Case from Suck UK uses the impenetrable strength of beastly prehistoric jaw to protect your most beloved PB&Js.

OK, a black nylon and elastic strap closure helps out a little too.

He may be dead and decomposed, but that doesn't mean T-Rex isn't still capable of spewing the stink off you. By way of nine saliva jets inside his mouth, no less!

The next time you're looking for a gift for a geek, ask him what size shower pipe he has in his bathroom. If it's a standard 1/2", you've got a winner, winner Cretaceous dinner with the T-Rex Showerhead.

You're pretty good at that, T-Rex? Want a job?

I Could Eat a T-Rex Spaghetti Measurer

Whether you're hungry enough to eat a T-Rex, or just need a quick coupla bites of the child from the family he's terrorizing, this clever kitchen tool will measure out the precise amount of meaty flesh you need to achieve satiation. Meaty flesh, in this case, being spaghetti noodles.

The I Could Eat a T-Rex spaghetti measurer adds a fun twist to portioning pasta, plus keeps the process much simpler than dragging out a scale or holding your noodles up to serving size photos on the Internet. The acrylic tool contains measurement slots for 4 different portions. A T-Rex full of raw spaghetti equates to 400 grams, or enough for 4 people. A Papa victim represents 130 grams of pasta, a man-sized portion, while the Mama victim is 100 grams, and Jr. victim 65 grams, the recommended serving sizes for ladies and kiddos.

Some people like to show off their perfect little families with stick figure decals splayed across their cars' rear windows. And other people - such as, for example, the people who read the posts from these pages, methinks - like to express their disdain for these braggarts with decals of a Tyrannosaurus Rex devouring their stupid line-drawn kin. Mmmm, says T-Rex. Your stick figure family was delicious.

In a strange cinematic and evolutionary twist, the next Jurassic Park sequel will feature a water-faring T-Rex whose genetically modified donut center will keep him afloat, but whose unmodified arms will prevent him from swimming any faster than the slowest member of a seniors water aerobics class. They'll call it a built-in safety feature for the humans!

Also, if you can manage to jump into or rise up from under the dinosaur dead-donut-center, he'll let you ride him!

Approach from the front, sides, or back, or miss the target though and, as per usual, he'll eat you.

T-Rex don't eat no stinkin' plants! ... Which is what makes him such a great planter. No chance he'll eat your succulents or asparagus fern the moment you turn your head like Triceratops.

I wouldn't have named it the Dinosaur Hanukkah Menorah. I would have called it the T-Rex Dinosorah. But, I don't work for Zion Judaica Ltd, and I'm not "Margarita," the person who designed this cretaceous candle holder...

Sometimes babies are born with disproportionately large body parts, which they subsequently grow into. Like dog paws and human eyes. No such luck for the baby T-Rex. Looks as if those little guys are stuck with midget...

So, the dinosaur foot of this Dinosaur Foot Waste Basket from Regal Robot is huge. Maybe even life-size, depending on which dinosaur they've taxidermied to make the trash can. But the actual garbage container, the liner...

When I first saw this Motorized Inflatable T-Rex Ride-On Pool Float I thought all my dreams had come true. T-Rex. Pool float. Able to tool around the water via joystick and zero effort on my part...

I wonder if this Life-Size T-Rex Skeleton for $100,000 really exists, or if some paleontologist is just pretty sure s/he can build one if a T-Rex-loving sucker loves T-Rex enough to fork over $100,000 for a life size...