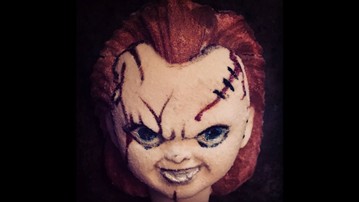 But 13 is also the perfect number for this horror-driven endeavor, so I took a stab at curating a list that was short and (viciously) sweet, and hope I didn't omit anything that pisses you dudes off too much, or causes anyone to go all Jason Voorhees or - this year's #1 Halloween terror - Karen on me.

Note: Horror movie products for sale are priced as they were at printing. Pricing, and availability, are subject to change.

Welp, here's one puzzle box I don't want to solve. I don't care what I could stash inside Hellraiser's Lament Configuration, I don't care if it's just a prop replica taken from an allegedly fictitious horror flick, and I don't care if it's Halloweentime. I do not mess with scary clowns, possessed children, or Pinheads.

My answer is, Heeellll no. But if you're a horror-loving, fate-tempting fan of the homicidal doll, the Chucky Bath Bomb will make a fine addition to your shelf of grooming products.

And even if you don't buy her, better make room for Chucky's bride, who will invariably show up there too.

I'd say Sideshow's Limited Edition Life-Size Alien Queen Wall Sculpture is for only the truest of Alien franchise fans and collector's on multiple levels: 1) It's a gruesome, bloodthirsty, and terrifying Alien Queen that will probably scare the chestbursters out of everyone in your family, even after they get used to it, and especially when they're left home alone with ol' Queenie at night; and 3) It is all of the above, plus life-size, with the sculpture measuring 37" tall x 32" wide x 20" deep; It cost $1,600.

Really? When turning horror classic The Shining into a jigsaw puzzle they went with the floor plan of the Overlook Hotel rather than Nicholson's Heeeere's Johnny! face busting through the door?

Well. Maybe the second one was too scary for the kids.

For those into Stephen King's novel / Stanley Kubrick's film, scary movies in general, or fun family Halloween activities, the Shining Floor Plan Jigsaw Puzzle is a cool tribute that, unlike the flick itself, won't give everyone who sees it nightmares.

How's about a deathly white face for your lush green thumb? Displaying a Michael Myers planter as part of your household decor is a weird and creepy thing to do any other time but Halloween. So...get ready to party, weirdos and creepsters, because the brief few weeks of the year when other people will think you're cool and normal are upon us!

COVID and serial killers have made jigsaw puzzles so popular! The latter, John Kramer from the Saw film series, is the real inspiration behind this Jigsaw Puzzle Piece Prosthetic from Etsy shop Locked in the Cellar, but I think it plays nicely into the quarantine-and-death vibe surrounding COVID too.

Jigsaw packages come with both the bloody cutout prosthetic and the missing puzzle piece, the latter sealed in a clear zip lock baggie so you can carry it around to enhance the flayed skin effect, or hide it and let your family / guests hunt for the ever-elusive last piece of the puzzle.

Looks like IT's ready for Halloween. Pennywise's red balloon looks even creepier emanating the LED glow produced by this Pennywise Balloon Lamp. Talk about a counterproductive piece of lighting. Lamps are supposed to eliminate the uncertainty and hidden dangers of the dark. Making the lamp itself a replica of the sign of an ancient evil parading as a dancing clown is just mean.

Aw, dude. I'm totally gonna buy a Pennywise Balloon Lamp and swap out the one on my wife's nightstand with it some night when she's getting wined up with her girlfriends.

Nightmare on Elm Street fanatics who don't mind that their Freddy Krueger Fire Pit won't arrive until Halloween 2022 will receive the blazing backyard terror complete with Freddy's bladed glove resting under his chin, and sticking out to ensure he'll draw blood even if you do manage to stay awake.

Amelie meets Friday the 13th! What a heartwarming and adorable way to die!

TactiPrints' Jason Garden Gnome is about 8" tall, and 3D printed at a very reasonable price, so when you plant one in the neighbor's yard, and they smash or burn it immediately following the unleashing of a bloodcurdling scream, no big deal. Just buy another one.

Orrrr, buy a whole army of Jason Garden Gnomes to back up the zombie kids in your own Halloween tableau.

The only thing worse than having a bad day is clicking on a link that brings you to a life-size replica doll of possessed Regan from The Exorcist while you're having a bad day. It just happened to me, and since misery loves company, here you go, dudes. I'm sharing it with you.

Prop masters The Scary Closet created Regan as part of an extremely limited collection of 10 (which, at printing, was down to 0, despite the hefty price tag) all signed by Exorcist extraordinaire, Linda Blair. In addition to being scaled to size, the Regan doll is almost meanly realistic. Like, they call it a collector's item, but any collector willing to put that evil thing in their house is either just as twisted as Regan's head in Satan's merry-go-round scene, or is planning the Halloween prank of a lifetime, and so just as mean as The Scary Closet.

OK, Jurassic Park is not a horror movie, per se, but you dudes can't deny the velociraptors were scary AF. I was around the age of the kids in the movie when it came out, and I almost peed my pants during that scene in the dining hall.

And holy crap, as if I weren't already terrified enough of these chihuahua-terrier...beasts. Now they have to go and put a raptor costume on it.

Pinhead Baby Yoda, now that's a mashup both strange and disconcerting, yet also entirely representative of the past 2 years. It's not really fair to Grogu, though. Sure, he has a voracious appetite, and occasionally eats others' babies, but he's mostly just good-natured, well-behaved, and adorable. Compared to most kids his age (er, apparent age) he's far from a hellraiser.

Pinhead Baby Yoda 3D print design props go to Geoff at Hex 3D, and if you want to assemble and paint him yourself, you can get the raw prints from 3D Print Merc Mart, as well as the painted version above. They also have iterations of Baby Yoda mashed with Michael Myers, Freddie Kruger, Chucky, Pennywise, Jason, and Leatherface.

My sister let me watch A Nightmare on Elm Street when I was 5 and I think it made me wet the bed in fear every night for like 3 months, and my mama was so mad, and I was so afraid, but I couldn't tell her why because she would have clobbered my sister for letting me watch a rated-R movie and I don't sell out my blood like that, dude.

Since then, I've seen way scarier things, but Freddy Krueger will always be the OG definition of horror in my heart. And here we have a sweater inspired by the chest of souls Freddy housed in A Nightmare on Elm Street 4: The Dream Master. An included secured battery pack allows the souls to move about all creepily like Cornelius' stomach post brat-and-kraut consumption, as well as outputs sound effects from the film.

Halloween Ends is coming to a streaming service near you, and possibly to your kids the moment they see this 35-foot inflatable Michael Myers in someone's yard when they're trick-or-treating this year. And in both cases...

Dark days are ahead for anyone who uses this Michael Myers Sunshade. Haha, get it? A little slasher humor to brighten your day, 'eh Dad? I mean, I'm just assuming it's Dad reading this, Dad who's interested in: 1) decorating...

Never thought I'd write these words, but, Starring Freddy Krueger as: Jesus! This scary parody on da Vinci's The Last Supper painting sees favorite horror movie villains taking the place of JC and his apostles on the...

You gotta be a big fan of Michael Myers, Halloween, horror movies, and/or creeping people out to drop $650 on a 14K Gold Michael Myers Pendant. It's not even made of hand-cut diamonds - though I'm sure there's some cutting...

I scream, you scream, we all scream for...bathtime? Happy splashing, happy blowing, happy skin-softening, and happy Halloween from the Screamo Cherry-Scented Bubble Blower. An inspired seasonal release from Lush, the...

Really? When turning horror classic The Shining into a jigsaw puzzle they went with the floor plan of the Overlook Hotel rather than Nicholson's Heeeere's Johnny! face busting through the door?...

Things That Make You Go Ewww

Take a quick scan through this collection of things that make you go Ewww, and see if you can pick out a pattern. Or maybe it's better to say pick out, pop out, suck out, blow out, or stroke out pattern. Any guesses?...

A Haunted Road Atlas: Sinister Stops, Dangerous Destinations, and True Crime Tales comes from And That's Why We Drink podcast hosts, Christine Shiefer and Em Schulz. Take the interactive travel guide with you on road...

The only thing worse than a Monday is clicking on a link that brings you to a life-size replica doll of possessed Regan from The Exorcist. It just happened to me, and since misery loves company, here you go, dudes. I'm...

Home Depot is following up the spooky success their 12' Skeleton from last Halloween not only with even more 12' Skeletons for this year, but the all-new 12' Inferno Pumpkin Skeleton with LifeEyes (i.e., LCD eyeballs...

When the staff at the H.R. Giger Museum in Switzerland saw this life-size replica head of the monstrous Alien their namesake created you could literally see the pride and joy bursting from their chests. (Good luck to...