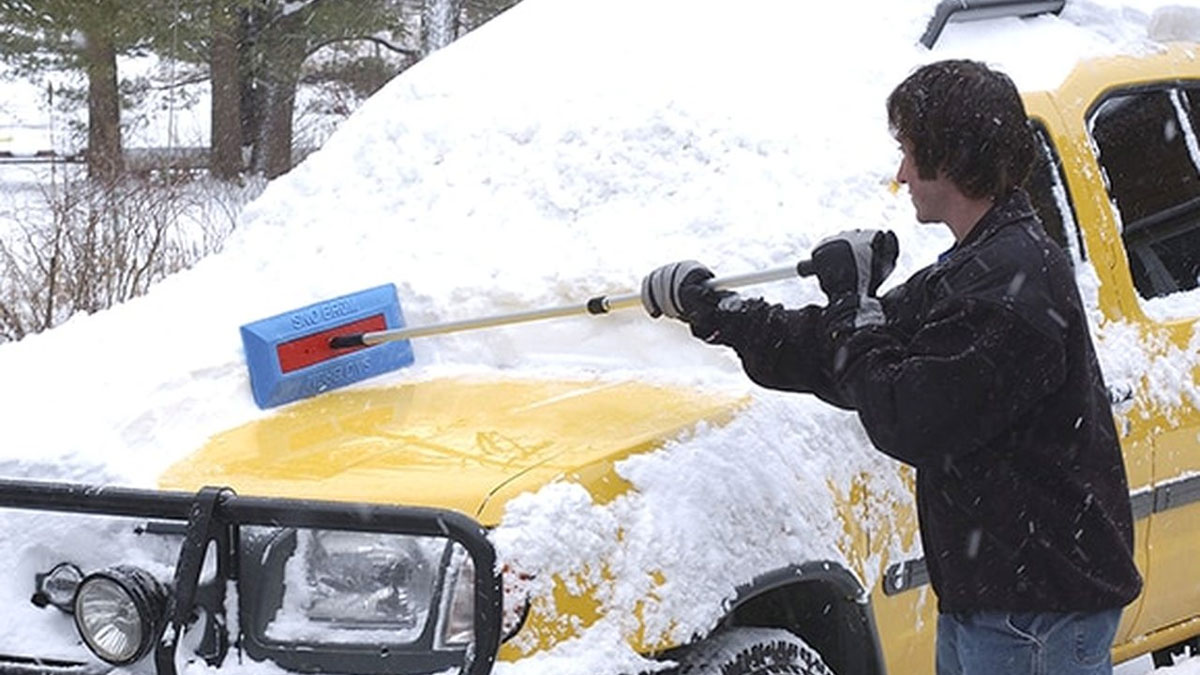 I'm hesitant to get a SnowBrum snow remover because I'd hate to ruin the excitement for the other cars on the road after a snowstorm. You know, the thrill of driving behind someone who scraped their windshields and side windows - the snow and ice-covered parts of their car that affects their own driving safety and experience - but not the roof, hood, or other areas that are still stacked 8" high with last night's accumulation. Then end up creating a whole new, vehicle-generated blizzard for all the other drivers near them! And, for the especially lucky ones, a horizontal avalanche if a bunch of the snow congeals and flies off as a big chunk!

There are various state laws in place about snow removal from vehicles on the road, but not all of them specifically address the ice missiles that can launch from incomplete efforts. Use of brushes like the SnowBrum is simply a gesture of common courtesy and concern for fellow drivers. Do we still have any of that?

The SnowBrum itself isn't so much a brush as a push-broom, but to prevent damage to your car or truck's paint the telescoping tool has a foam rather than a scraper's plastic or rubberized head. The handle extends from 17" to 28", and SnowBrum recommends using pushing rather than pulling motions to most effectively remove snow. And avoid dumping it on top of your own self, Homer. D'oh!

The SnowBrum is suitable for removing snow from small- and medium-sized vehicles, as well as from awnings, and pool and hot tub covers.

When people ask me if I want to go snowshoeing I always say no because this activity usually involves walking. Often up a steep slope. In the snow. It's cold, labor-intensive, and there are no Playmates wearing nothing...

This Heated Windshield Ice Scraper looks like a SkyMall especiale! (RIP SkyMall, at least from the skies. I've heard you can still shop their 1980s-era gadgets online.) And you know what that means: gift for Dad, ordered...

A 2012 red dot award winner for design concept, Lin Min-Wei and Liu Li-Hsiang's Rain Shield could make carrying an umbrella 1) somewhat stylish and 2) more than an exercise in futility. Its shield-like construction uses...

When winter piles on the snow, the Snow Joe Cordless Electric Snow Shovel...moves it around and piles it elsewhere. Just like a manual shovel, but presumably without making you break a sweat under your puffy coat, or...

They're like Wolverine claws for the bottom of your feet. These Meindl retractable spike boots stick it to ice and snow with their patented, perfect traction Tec Vision spike system. When wearers flip out the boots' heel...

1. Check out the video above of a dude dumping Hershey's Chocolate Syrup on a white Keds tennis shoe treated with NeverWet. 2. Be amazed by NeverWet's water-, oil-, and apparent chocolate-syrup-repelling technology. 3...

Oh the trouble Clark Griswold could have saved himself if only he'd gone on Christmas vacation in the 2010s. Nowadays one little green box fitted with one pint-sized disco ball connected to one tiny projector are all...

It may be lovely weather for a sleigh ride together, but I think I'm gonna sled solo on a Bobsla this time. And by "sled" I mean fly downhill and across the snow at speeds of over 20 MPH in this snowmobile / drift kart...

The Best Snow Sleds for Adults

My fellow adults! Sledding might be our only solace in the predicted brutal and snowy winter ahead. The toil of lugging a sled up a snow-drenched hill, and the payoff of hopping on it to fly back down once we reach the...

The only thing I like to shovel is food, into my mouth, so I am very happy to see the Snowbot autonomous snowblower making its way (in a haze of white powder!) to market. A Roomba-style robot for the outdoors, the Snowbot...