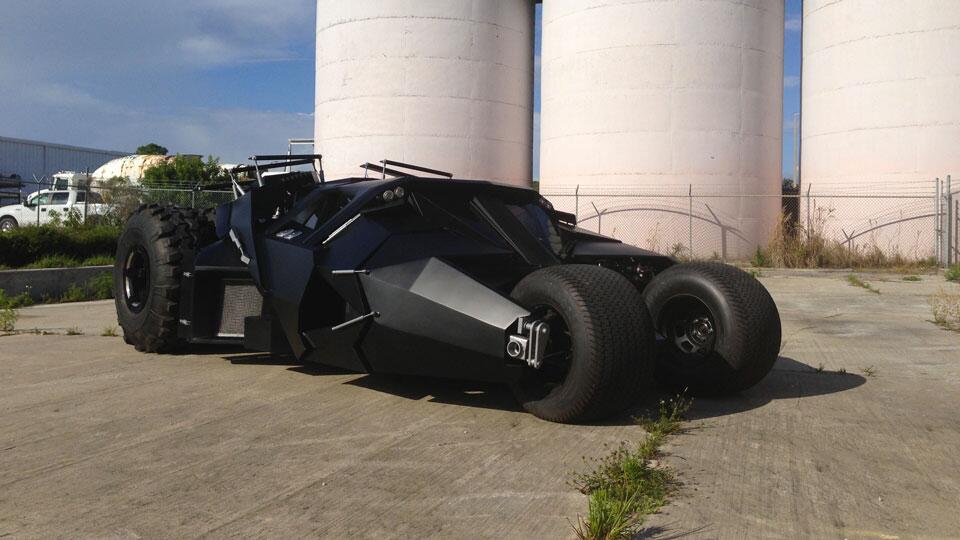 For a million bucks you'd think they could've gotten a couple shots of this replica Batman Tumbler somewhere nicer than a slab of cracked pavement with weeds growing up through it. And what are those in the background, grain silos? Methane tanks? Eh, no matter I guess. It's still a custom-built Batmobile. That you can drive. On the street. Only 5 have been made worldwide, and now one high-rollin', Internet-trollin' SOB will have the chance to get outta his Tumbler dreams and into his Tumbler car.

Modeled after the Christopher Nolan films' take on Batman's ride, this concept Tumbler has been fitted with an 8-cylinder LS1 engine and a custom-crafted frame, chassis, and drive line. It has an automatic transmission, which I guess is good news if you're the kind of rich person who doesn't know how to drive a stick, or the kind of average male who would prefer not to have to pay too much attention to driving while driving this guaranteed sex machine.

Designed and manufactured in the USA. That's the battle cry of the 2014 EQUUS BASS770, a contemporary nod to American muscle cars of the 60s and 70s. It's also probably the reason for its starting price tag of $250 grand...

Although building a Porsche 911 1:4 scale working flat-six boxer engine won't get you any closer to owning or driving a Porsche 911, this 280+-piece model kit will give you detailed insight into what makes the coveted...

A few bucks shy of being able to afford the jet turbine powered Batmobile? How about buckling your phone up in one instead? Specifically, this most excellent and radical and schwing!-worthy replica Batmobile case for...

Motor trike. Until about 3 seconds ago that term seemingly would have referred to something incredibly lame, wouldn't it? Especially when used in tandem with descriptors such as "electric vehicle" and "eco-friendly"...

Lazareth's Wazuma V8F Matte Edition combines the best of the Germans with the best of the Italians: it's simple, efficient, and knows the most awesome rides in life are experienced at varying degrees approaching horizontal...

The Karlmann King is the ride Batman will get once he settles down, has kids, and needs a more practical car, a roomy SUV, to cart them all to soccer practice and trombone lessons in. The Dark Knight will also buy it...

The 50th Anniversary Lamborghini Edition impec is the bike P. Diddy or Kanye West would buy if they took up cycling. Which is to say if they learned to ride a bicycle. Oh the comedy that would ensue the first time Puffy...

You've heard the term "wire money," but Conty Fonane's 1967 Ford Mustang GT500 here is some real Wire. Money. Unlike anything I've ever seen or heard of before. The Lesotho-born, South Africa-based artist bends and winds...

This 1967 Ford Shelby Mustang GT500 Fastback Coupe has a pretty specific rarity: it is one of only 11 Shelby American "Engineering" company cars produced in 1967. If you're a real muscle car guy, those stats might be...

This Batpod is real--one of six special effects dude Chris Corbould made for The Dark Knight and The Dark Knight Rises movies--and it's up for auction beginning September 27, 2016. You might want to think twice about...

What stands between you and the driver's seat of a precise, officially-licensed roadworthy replica of the 1966 Batmobile? One year and a few zeros, my friend. The most iconic of all the Dark Knight's transportation iterations...