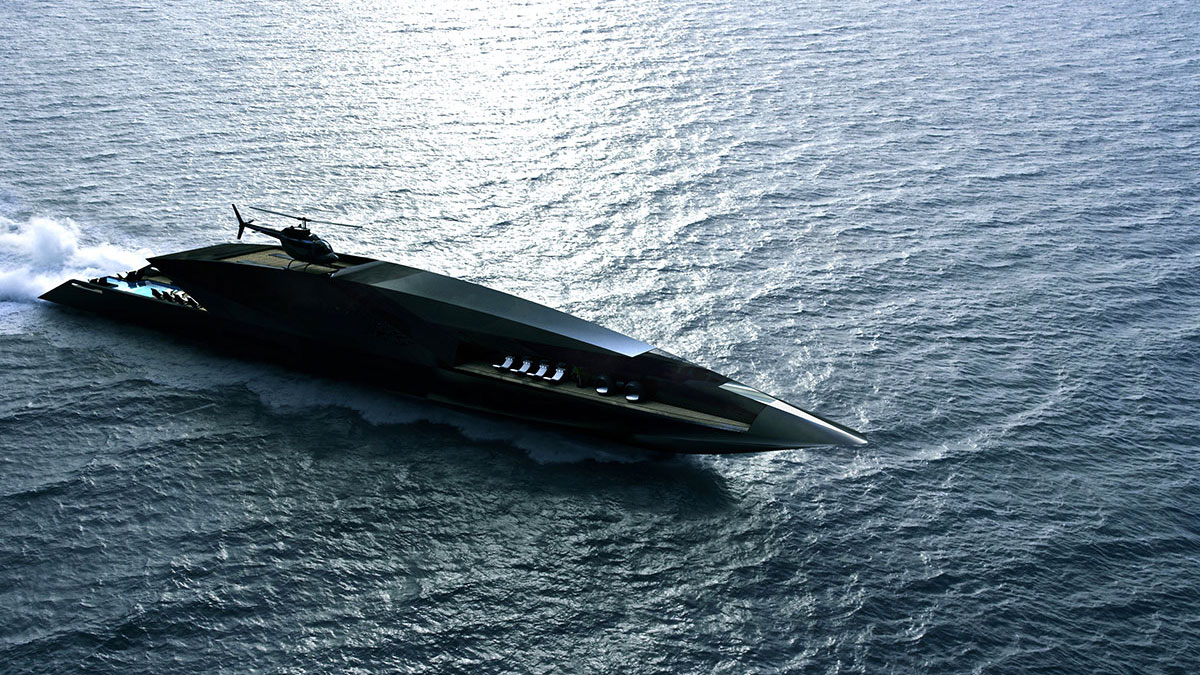 In a way it sucks that the Black Swan Superyacht is just a concept right now because that means its technologically-advanced, supremely-luxurious, ninja-shark-looking self doesn't really exist. But in way it's good too because even if Timur Bozca's boner-inducing design were real, I could never afford it, or even afford to set foot on it, so at least as "just a concept," none of the ultrarich d-bags of the world can have it either.

Bozca says he finessed the simple lines and dramatic angles of the Black Swan using an arrow as his muse. The exterior wants to be as aerodynamic as it is distinctive. And if it needs help on that first front, Bozca anticipates equipping the yacht with 4 engines able to generate up to 23,172HP, and a top speed of 28 knots (about 32MPH).

Additional Top 0.1% features include a top deck helicopter platform, an extended beach club with pool, and accommodations for up to 12 people in a master, plus 6 guest suites.

Like Bozca's eye for design? Check out his TRON Car concept here.

Camping, camper vanning, sailing, even vacation rental-ing with an nCamp Food Prep Folding Chef Knife means one thing: now you're cookin'! This is the Food Prep Premium Chef Knife, one of four currently in nCamp's folding...

Fluzzle Tubes, now these are the kind of hookups everyone will enjoy. The interlocking float tubes have traditional tubular center butt holes, with mesh supports on the bottom, and backrests for comfort. But rather than...

The BeTRITON Amphibious Camper-Trike is finally taking after the first Little Piggy and going to market! Formerly known, and seen here, as the Z-Triton, this 2.0 upgraded and rebranded recreational vehicle is still 100%...

Ahhh. It's a see-through canoe/kayak that seats two and provides the perfect setting for a romantic, yet adventurous date of paddling the high seas and taking in all of its technicolored fishies, regally swaying anemones...

100 hours to build this beast. Totally worth it. Their words, not mine. Not that I'm calling BS or anything. It's just that I'll never know if Starwood Motors' Full Metal Jacket Jeep is totally worth it or not because...

DeLoreans set the standard and all, but if I had to travel to and from the future today, I'd want to hit the space-time continuum in equal parts comfort, class, and automatic liftable flybridge lounge that self-converts...

11 of the Most Expensive Things for Sale on Amazon

I tried to curate my collection of 11 of the most expensive things for sale on Amazon not just according to their cost, but also their substance, how well they present, whether or not I looked at their price, read their...

The Raptor Platform XL Fishing Boat is where I imagine Chris Farley would reside if he moved from his van down by onto a raft down on the river. The inflatable floatable is certainly a sight to behold, and maybe in a...

TRITON, the human gills design concept I showed you dudes here 2 years ago (and which many of you had mucho to say about in our comments section) is running a crowdfunding campaign to actually produce the equipment. TRITONs...

Where there's muck, there's brass. Plastic muck, and Oceanus Brass, to be specific. The Oceanus Brass Cablelaid is a cordage tool and on-demand recycling companion that breaks down plastic bottle waste into yards and...